Once upon a time there was a boy. The boy had large round glasses and light brown curly hair, all the way down to his shoulders. The boy’s name was Mozart and he was a magician! There was a talent show at school and Mozart was set to perform his very first show.
Mozart was so excited and he practiced his tricks over and over and over again. Finally, it was the day of the show and he got ready to get on stage. He checked to make sure everything was perfect. His cape was pressed, his hat was tall and his magic wand was shined. Mozart stepped on Stage and everyone cheered. 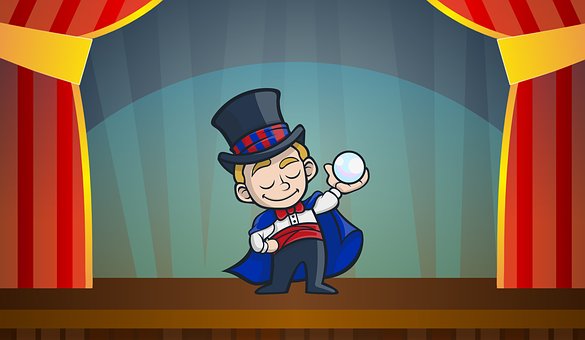 “Hello Everybody!!! ” Mozart screamed. “My name is Mozart and today I am putting on a magic show!” The crowed cheered. “My first act is Juggling… whoops!” Mozart started to juggle and lost track of the balls and they all landed on the floor. The crowed laughed. Mozart decided it was best to keep going. “My second act will be to make Harold the bear disappear!” Mozart said. The crowed cheered.
“First we put Harold in the box, and then we wave the wand and say the magic words… SHALAKAFLIMLAMDOO! And now we see that Harold has disappeared!”
Mozart open the box and smiled to the crowed who just laughed and laughed at him. Mozart didn’t need to look over to know that Harold was still sitting in the box. Mozart started to turn bright red with embarrassment. He wasn’t sure if he should keep going or not because nothing was working out right and every one was laughing at him.
Then he heard a hiccup. First it was tiny, but hen he heard another one, and another one, and another one! The hiccups got louder and louder. Mozart had an idea.
“For my final trick” Mozart Said, “I will make your hiccups disappear! Who is hiccuping? Can you please come up here?”
After some shuffling in the audience a little girl named Mary appeared on Stage. Mary was in 3rd grade and had long pigtails in her hair and freckles on her nose and cheeks. Mary was nervous to be on stage but Mozart promised her he would make her hiccups disappear.
“Mary, please take a deep, deep breath and hold it. Then when I say okay open your mouth and exhale till I say stop.” Mary took the deepest breath ever and held it as she watch Mozart.
Mozart waved his wand once, twice and then nodded at her to open her mouth. Mozart pinched the air in front of Mary’s mouth and told her to exhale. As she exhaled Mozart pulled and pulled and pulled and finally, when Mary felt like she had no more breath to exhale, “Stop!” Mozart Screamed.
Mozart took her hiccups and threw them in his hat. Then Mozart placed the hat back on top of his head and everyone sat in silence waiting and watching.
After 30 seconds Mary said “They’re all gone!” And crowd cheered and clapped as Mozart and Mary took a bow!
And that is how Mozart became the Amazing Magic Hiccup Puller.
The end.