I have two kids. A 7 year old girl and a 9 year old boy. Next week is April Break for them. We were planning on having MeMa come and watch the kids Monday thru Thursday and then Friday my husband and I are taking the day off for our 11 year wedding anniversary. We don’t have anything planned for the anniversary, we just took the day off to hang out all together.

This past Tuesday my friend was telling me how she booked a suite at one of those indoor water parks for her daughters birthday and she is taking her 2 daughters and her birthday daughters best friend. Our kids have basically grown up together. They are honestly more like cousins than anything because they have been to every Christening, first communion, birthday party (both family and friends), family picnics, even some holidays, and plenty of play dates through out the years. So my friend was telling me how she was going alone and wished she had another adult to go with her and then she asked if I wanted to come with the kids and share their room. I would only have to pay for the extra $50.00 per night for the daily water park pass and then obviously for our food and activities…

I asked my husband if he minded if I took the kids Tuesday to return on Thursday and he doesn’t care. They’re off from school anyway and he has to work… The thing he really cares about is that Me ma would only be coming for one day so he will be missing all the dinner she makes when she comes to watch the kids… He’s joking, kind of. He’ll be home to take care of the dogs. I have plenty of vacation time so why not???

Tuesday I skipped into school to pick the kids up and I was like “Guess what??” Wanna go to the indoor water park??? The only catch is you two have to share a pull out bed.  And to my surprise BOTH kids were like, nah, maybe some other time! I was honesty shocked. When I was their age, if someone asked me to go away with them, I would  have slept on the floor in the closet to go. Just mention a hotel and you could have taken me to the next town over and I would have pretended as if I had never seen it before. Are my kids spoiled?
After telling them all the other fun things there are to do at this resort, my daughter changed her mind. My son gave me a couple excuses about why he wanted to stay home, but the main reason is he wants to sit in front of the television and play video games all week with his friends. I told him that there will be a daily time limit and he would not be doing this and then he decided that maybe he will go after all. 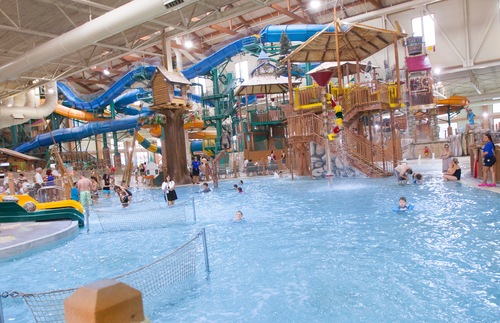 I am honestly still so shocked over their initial response. I don’t mean to sound like an old fart “back in my day, blah, blah, blah…” but that’s how it feels when things like this happen.
So this is where I am at. I am both super excited to go but also like, why am I the only one who is excited? We’ll see how it plays out. But does this happen to other people too? Do you get so excited about things and your kids are just like, Meh?